Typography in Design - Top Font Trends to Follow in 2021 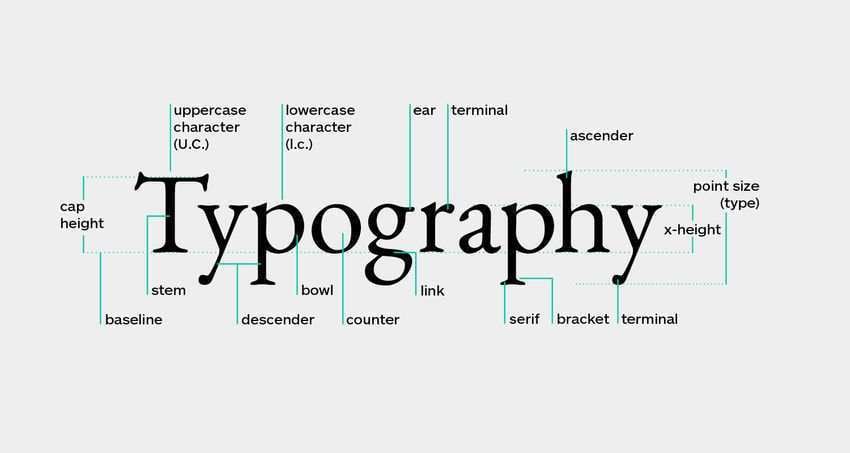 Typography is that art form and arrangement to make the written language readable, appealing and legible when displayed. This type of arrangement involves selecting typefaces, line lengths, point sizes, letter spacing, line spacing, and also adjusting space between pairs of letters. This article gives an insight into how to do typography and how to design a typeface.

Part 1 Looking into the History of Typography
Part 2 Typeface VS. Fonts: A Comparison
Part 3 Top Fonts to Follow while Making Designs in 2021
Part 4 How to create your own font

Part 1 Looking into the History of Typography

The first implementations of typography can be found in the cave paintings from the Upper Paleolithic ages. The first writing was developed in 3.500 B.C. by the Sumerians.

During the Middle ages when illustrated manuscript and calligraphy were in vogue, typography came into being in its current form, with the inventions of the printing press.

Since then, Typography has been an integral part of every kind of publication. It has been in vogue among designers on how to learn typography and how to create a typeface. 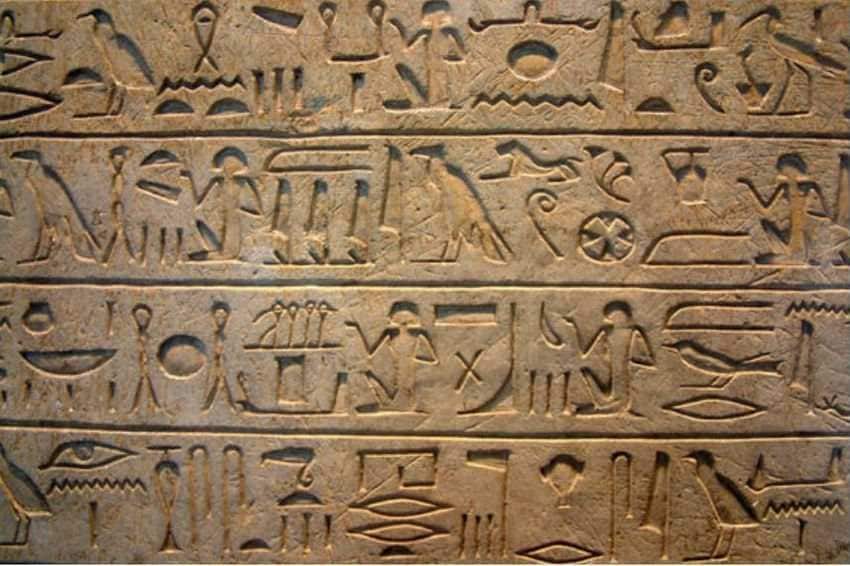 Part 2 Typeface VS. Fonts: A Comparison 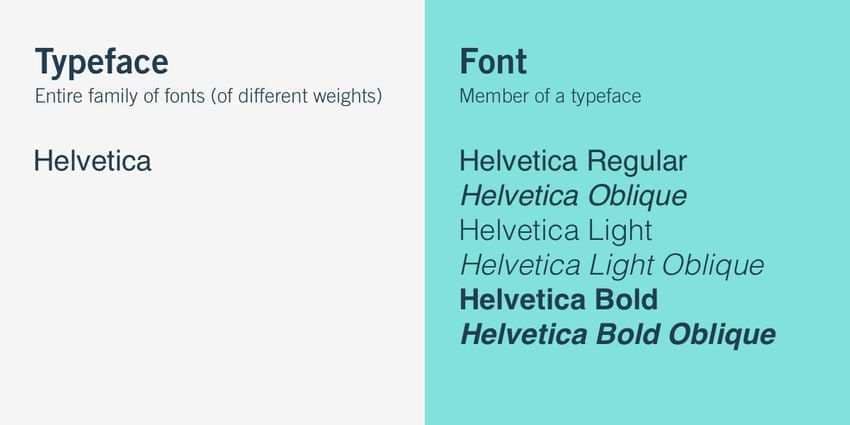 To begin with how to create typography, one has to understand the basic differences between Typeface and Fonts.

Sometimes we mix up typeface and font to be the same thing. But actually, both of them are two different aspects. In this article, we will understand the difference between a typeface and a font. This will help you to know the terms in a much better way. Also, it will help you to use both effectively.

The history of typefaces and fonts goes ways when texts were printed on pages manually with blocks and dye prints. At that time, special sets of blocks were created to give a unique look to the texts. These sets later came to be known as types or typefaces. Again each set of types, like bold and condensed, had its own box. These variations later came to be known as fonts.

A typeface is a certain set of sorts or glyphs that share a common design. A very common and well-known example of typeface is Helvetica.

Over time font is becoming more popular. Today it is found that most people are using the words 'types' and 'fonts' interchangeably. And to a certain extent, they are correct in either way. But currently, the difference between typeface and font is pretty confusing and unnecessary, and also regarded to be somewhat old-fashioned. So there might be an argument that knowing the difference does not matter to an extent.

Part 3 Top Fonts to Follow while Making Designs in 2021

To create highly communicative, aesthetic, and beautiful content; designers combine multiple objects to their content. With the combination of colors, images and etc., a designer creates a brilliant communicative medium that conveys the purpose and meaning to its intended audience. Even after so many of so many things, the text turns out to be the most communicative of all.

Selecting the appropriate font for the text makes the message carry its purpose and meaning to a greater extent. This is very significant in perspective to any visual communication.

Following are some of the top fonts used by professionals.

One of the most widely used fonts used by graphic designers as well as other professionals who need to create some kind of readable communication materials is Helvetica. It is a widely liked font that is praised for its unique and simple display. However, it has its dislikes as well for having a bit of tight spacing between the characters. 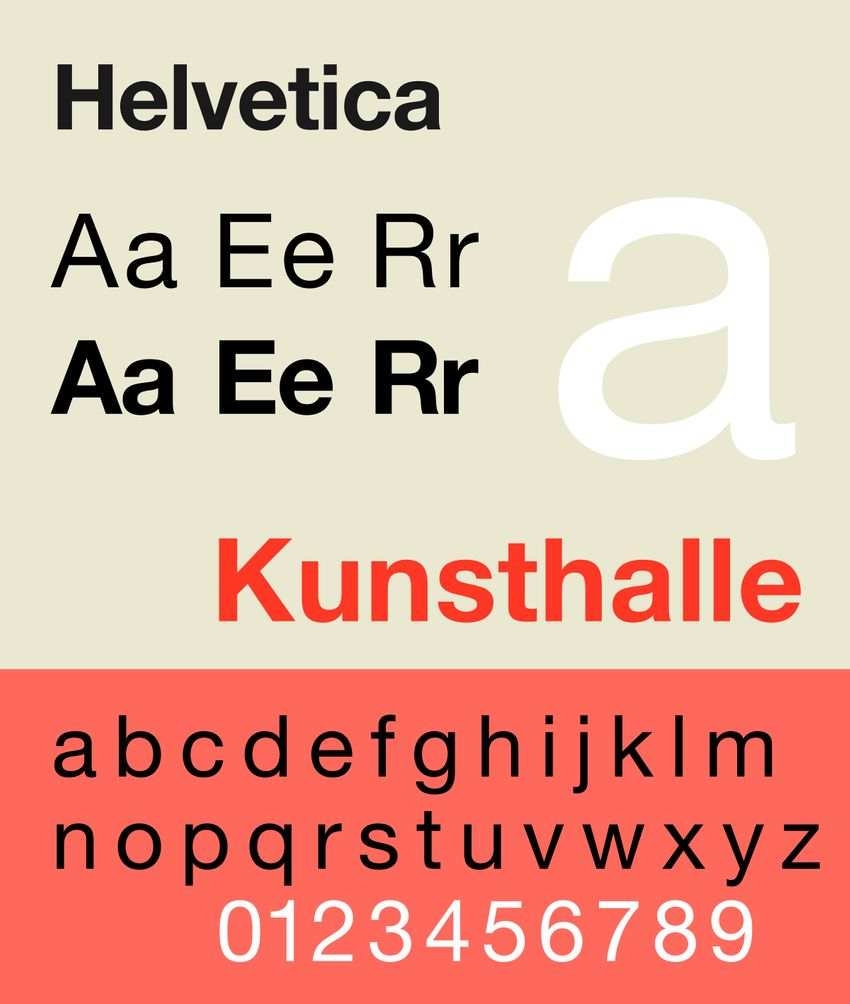 Released in 1989, Garamond offers various versions to graphic designers. The bold and subtle style of Garamond makes it appropriate for designing textbooks, magazines, websites, and other content that are used in the educational domain. Because of its popularity in the design industry, it has secured itself the title of the second-best font in use. 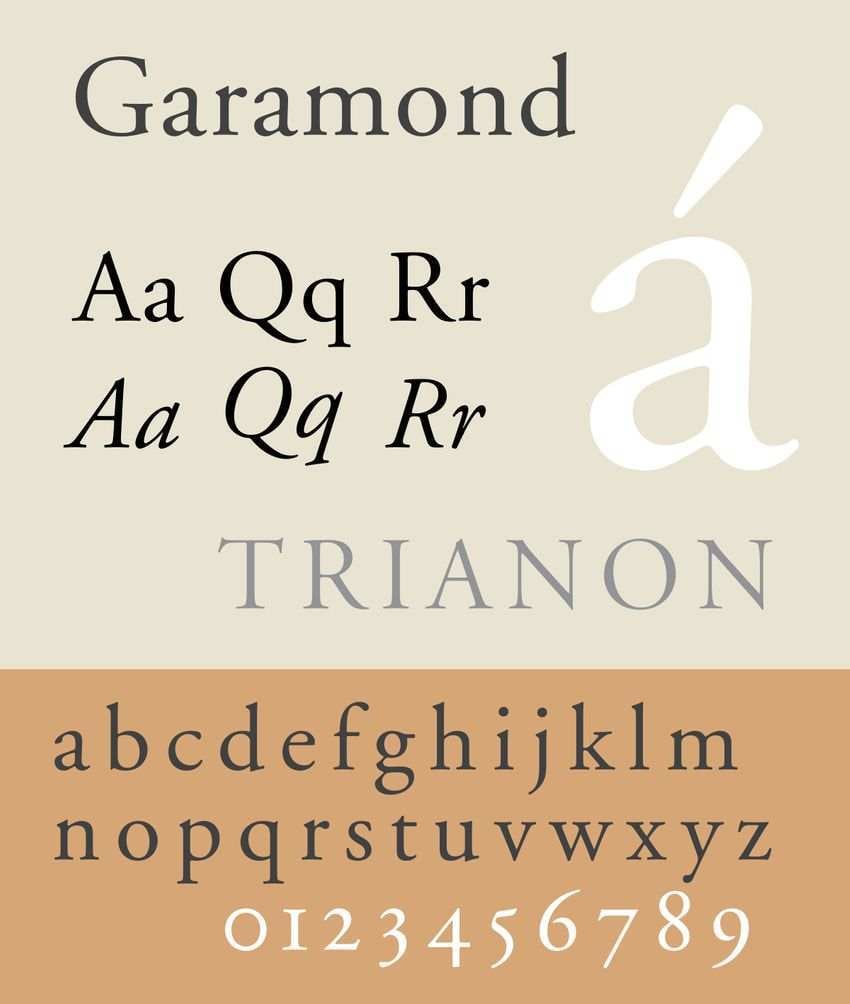 Trajan beatified many Hollywood movie posters. This font is the most recommended by designers and other professionals in the film-making industry. Also to note Trajan has symbols that relate to religion, law, marriage, or society. It gives that authoritarian feel that beautifies its presentation. 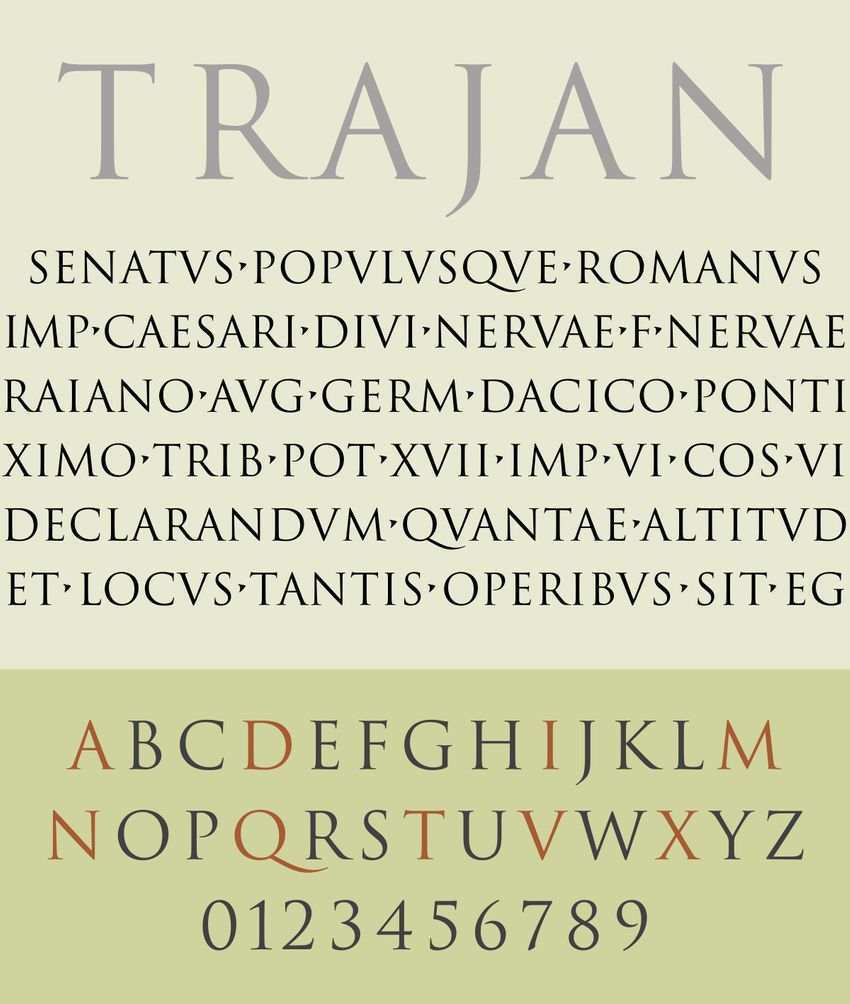 If you want to achieve the maximum in a limited space Futura is the font for you. There are other similar fonts as well, but none as good as Futura. Perfect for designing Logos, Slogans, Titles on Book covers or even creating a corporate typeface. Due to its clean and clear design, Futura is adhered to be forward and efficient. 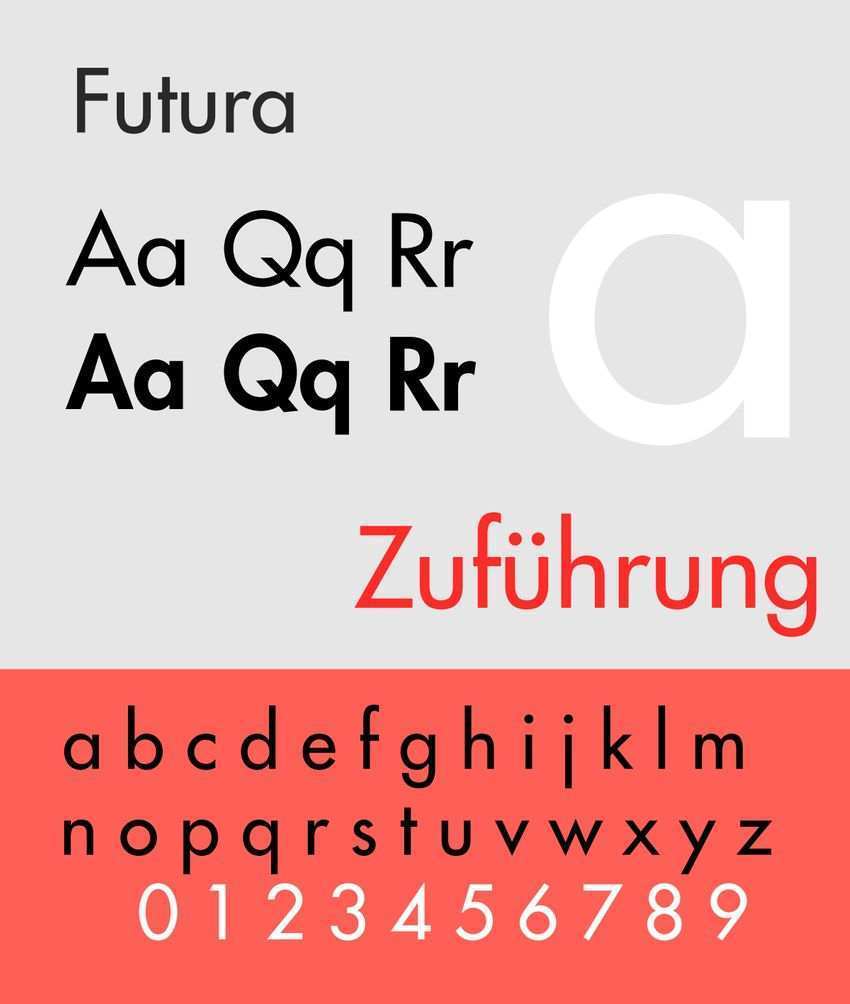 Bodoni is best known for creating logos, headlines, decorative text for the fashion industry. It has a rich history, where it has served designers and artists in enhancing their creativity. It has an easily recognizable typeface. With the brilliant usage of thick and thin strokes, Bodoni is attractive and mesmerizing. 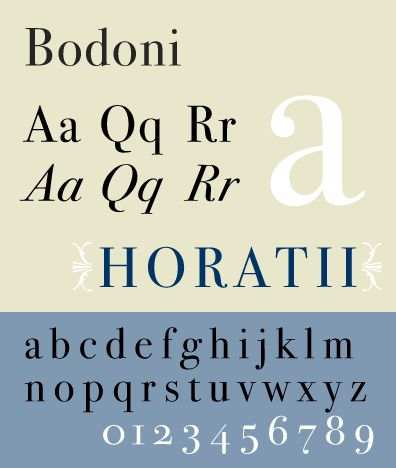 Frutiger was created by the famous Swiss designer Adrian Frutiger. It is basically an entire family of fonts. Categorized as "humanist", every character in the font is designed keeping in mind clarity and readability. All the characters in the font are recognizable even when they are small-sized or even when seen from a distance. This makes this font popular among designers and professionals. It is a very useful font designing displays and signage. 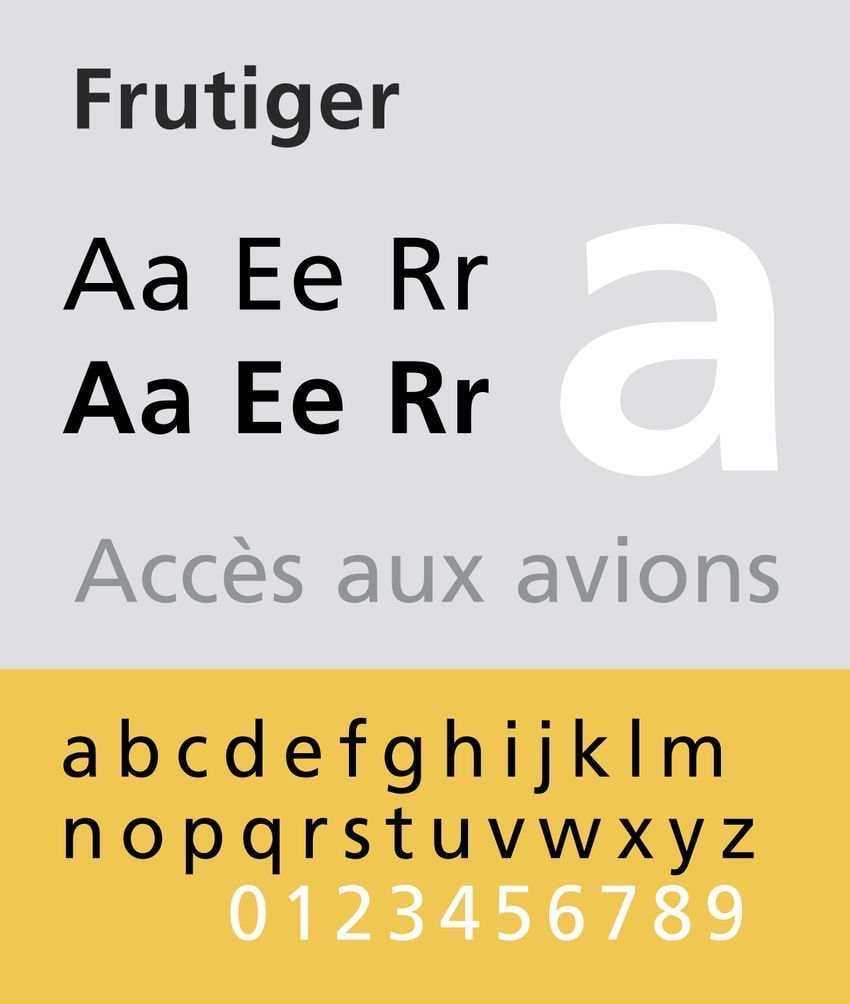 Introduced in 2000 by Frere-Jones and Hoefler, Gotham is a clean, modern, and professional font. There are also rumors that President Obama favored Gotham over other fonts for his posters and flyers in the election held in 2008. 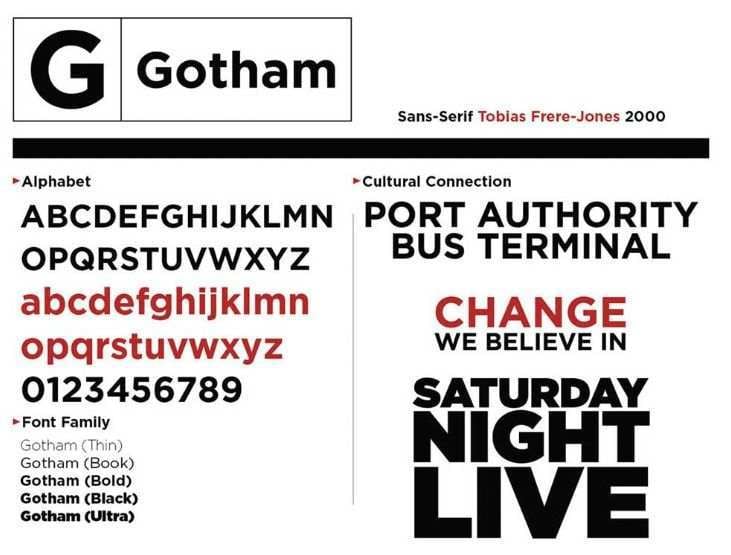 Part 4 How to create your own font 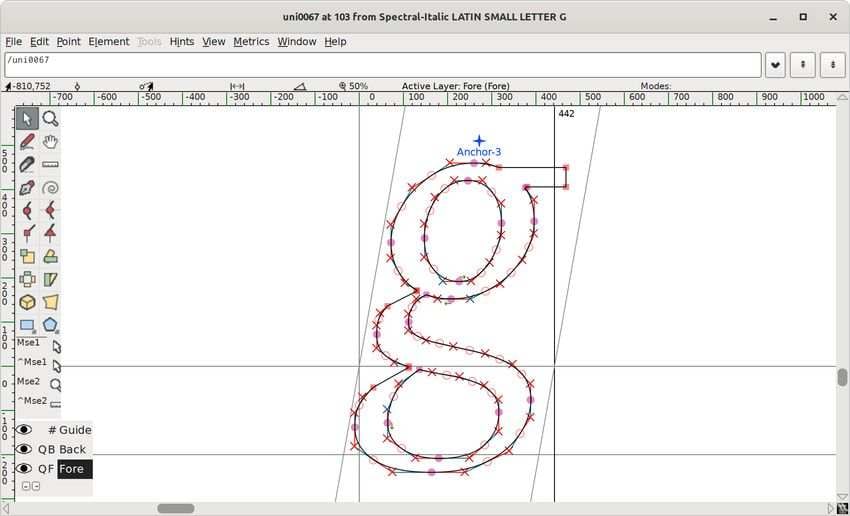 For some uniqueness in the work that you are sometimes doing, you wish for customized fonts. In today's time, customization of fonts has become easier with various free tools available. And also we have a wide variety to choose from these free tools. But before we choose the tools software it is necessary to know how to design font.

There are several tools to create a font like illustrator, Photoshop, Word etc.

The below steps will explain how the basic process goes:

The first step is the most important one. For designing your own font you need to outline the objectives. You need to be sure whether the creation will be for a specific project or for some broad aspect? Then the sizes of fonts you will require? Then comes the part where you need to confirm the font type? And lastly, any references that you have come across can that be used or not?

It is always very tempting to straightaway start with the software. But it is wise to design it first on paper. When you are designing it on paper, try creating something that speaks your vision. When you start straight with the software sometimes the output is awkward and also consumes a lot of time. So starting with pen and paper makes the work much easier.

3. Choosing the right Software and Installing the software

The next step is where you need to implement your font designs. There is a various number of free beginners tools software available. Choose the one you are comfortable using. Read the tutorial properly and get your job done. Few easy tools that you can start with are BirdFont, FontForge, and others.

After you have installed your preferred software, start with the creating part. Depending on the software you have chosen the process varies. You can start from scratch. Upload the images you have drawn on the paper and start editing. Once you have translated your control characters you can move ahead including numerical, letters, and other characters.

When the font creation process is on, it is much easy to focus completely on individual characters. Nevertheless it is also important to look into how the font will look like a complete set when refining them.

Conclusion:With time there is a multitude of fonts has been developed. Each and every font has its own set of advantages and disadvantages. With all this, typography continues to communicate the purpose and meaning of its contents. And the urge to how to do typography remains all strong.